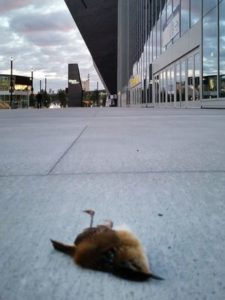 U.S. Bank Stadium in Minneapolis is covered with reflective glass that birds can’t distinguish from the sky, resulting in hundreds of fatal collisions. Before the stadium’s completion in 2016, many organizations—including ARC—contacted stadium officials asking them to alter the building’s design to prevent bird collisions. But no action was taken, the stadium was completed, and reports of bird fatalities began to pour in. Rather than taking immediate action to save birds, officials decided to undertake a lengthy study to determine how many birds were being killed. The results, which were finally released in November 2019, show that at least 111 birds died after colliding with the stadium in one year alone. Officials now say that they need several more months to consider the study results before taking action to prevent further deaths.

Please take a moment to send a polite e-mail to U.S. Bank Stadium (John Drum, Interim General Manager at https://www.usbankstadium.com/connect-with-us/contact-us) and the Minnesota Sports Facilities Authority (James Farstad, Executive Director at james.farstad@msfa.com) telling them that they have delayed for too long! There are many ways to retrofit the stadium to prevent these tragedies while maintaining its aesthetic appeal including patterning the glass and using window films, decals and tape, screens, grilles, shutters, exterior shades, awnings, and overhangs. Tell them to take immediate action to prevent further bird casualties!