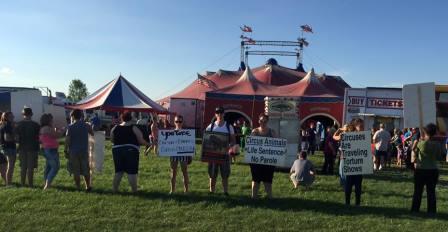 ARC volunteers organized a demonstration against the Carson & Barnes circus in St. Michael on Tuesday, July 21 and reminded the public that wild animals are wild, not playthings for our amusement. Thank you to all for standing up for animals used in entertainment!

Carson & Barnes was cited by the U.S. Department of Agriculture (USDA) earlier in 2015 for failing to provide adequate veterinary care to Nina the elephant, who lost 500 pounds over just a few months. The circus has also been cited for using excessive force with a bullhook—a weapon that resembles a fireplace poker with a sharp hook on one end—and paid a penalty to the USDA after undercover video footage showed a trainer violently attacking elephants with a bullhook.

The USDA filed a formal complaint against Carson & Barnes in May 2015 for violations of the federal Animal Welfare Act (AWA). According to the complaint and news reports, the circus allowed three elephants—Viola, Kelly, and Isa—to run amok for 45 minutes at a performance in St. Charles, Missouri last year. The animals reportedly became “stressed” after circus performers asked the approximately 8,000 audience members to create loud noises by, among other things, stomping on the metal bleachers. The circus’s actions put the public in danger and caused the animals to sustain abrasions and lacerations.

How can we put a stop to this traveling torture of animals? – refuse to attend circuses with animal acts and ask your friends and family to do the same.