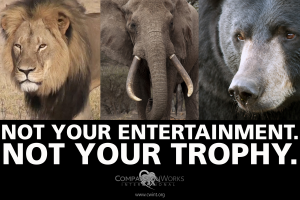 After suffering for many hours, Cecil the lion was brutally murdered by Minnesota dentist Walter Palmer in 2015. This travesty raised awareness about the brutal, selfish, and ego-driven activity known as trophy hunting, during which animals are killed for the sole purpose of becoming a head hung on a wall or a skin thrown on a floor. The time has come to put an end to this deadly, selfish practice. The Animal Rights Coalition, in partnership with Minnesota Animal Liberation, will protest outside of the Minnesota Safari Club World Hunting Expo at the Minneapolis MarriotT Northwest, 7025 Northland Drive North in Brooklyn Park from noon to 2:30 p.m. Join us to tell expo goers that killing isn’t conservation and animals are not trophies. Signs will be provided. RSVP at the Facebook event. Banner courtesy of Compassion Works International.