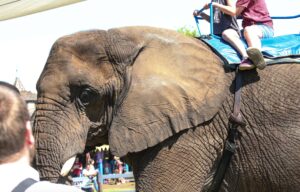 The Renaissance Festival is offering elephant, camel, pony, and llama rides yet again this year. While many people jump at the opportunity to get close to animals by buying exotic animal rides at fairs and fests, they probably wouldn’t if they knew about the suffering the animals endure being treated as amusement park attractions.

These animals are trucked around the country to different venues in small trailers and chained for hours each day. If they were allowed to live in the wild, they would have extensive social networks and travel miles upon miles every day. But when they’re sentenced to being “rides,” they’re forced to walk in circles day after day with hundreds of pounds on their backs for long hours, bored and uncomfortable.

There are huge public safety concerns, as well. These are wild animals who are forced to comply with their handlers’ demands by force, and sometimes they will reach a limit, resist their captors and revolt.

Elephants also carry the human strain of tuberculosis (TB) and can easily transmit it. Most companies fail to have valid TB tests performed on their elephants due to the cost and difficulty of administration. The Centers for Disease Control and Prevention acknowledges that this disease is highly transferable from elephants to humans. Yet, despite their knowledge of the inherent cruelty and danger, the Minnesota Renaissance Festival continues to feature exotic animal rides.

Join our protest to help raise awareness about these unethical attractions at the Renaissance Festival and encourage people attending to skip the animal exploitation and instead enjoy the activities that don’t hurt animals. RSVP here: