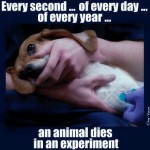 Thank you everyone who participated in the STOP AALAS Protest on Sunday, November 4 at the Minneapolis Convention Center. We had an amazing turnout of about 100 people and we made the news! Kim Socha, Jenna Cameron, Ali Lillehei, and many others, thanks for helping organize. 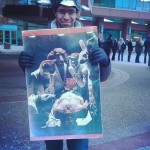 It isn’t every day that this many animal tormentors all congregate in one place, and right in our back yard, so thanks to those who came out to represent compassion in the face of institutionalized animal cruelty. The peaceful protest included a post-Halloween costume component to represent the many nonhuman animals who have died in experiments: mice, pigs, primates, dogs, cats, and other animals.