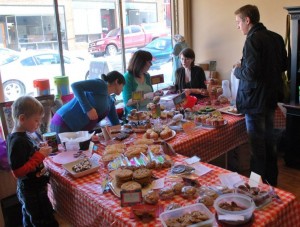 Thanks to everyone who came out to the Twin Cities version of the World Wide Vegan Bake Sale on Saturday, April 20 at Ethique Nouveau, 317 W. 48th St. in Minneapolis. The sale was a smashing success and we nearly doubled the amount raised for animal advocacy programs from the previous year. Special thanks go to Celeste, Betsy, and Troy for organizing the event and to Pizza Luce for donating several gift certificates as giveaways.