Comments Off on Animal Exploitation at the MN State Fair September 28th, 2022 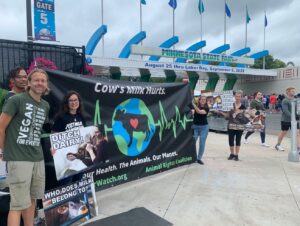 ARC activists were handing out literature, vegan cheese samples, creating chalk messages, doing TV Outreach, and holding banners and signs at and near the Minnesota State Fair this year as part of our campaign to educate the public about the hidden world of animal suffering at state and county fairs. We focused on how cow’s milk hurts our health, the planet, and the animals, and how cows at the fair suffer tremendously. We’ve already reached thousands, but just because the fair is over doesn’t mean our campaign is. This is a long-term endeavor, and there’s plenty of behind the scenes work to do between now and next August. Please email amyleinen@animalrightscoalition.com to get involved and make your voice count for the cows!

View ARC in action at the State Fair during our sidewalk chalk event, TV outreach, food sampling and banner display. You can also watch us live during TV outreach at the fair on Thursday, August 25th.