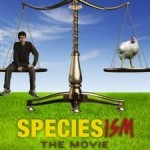 All around the world wild animals are fighting against humans for their very existence and scientists are predicting a human-caused sixth extinction. Farmed animals are seen only as “stock” without regard to who they are individually, their pain, or their fears.

We humans love our “pets” and other animals who have been deemed our “companions” while participating in activities each day that cause other animals to suffer and die. Are we incapable as a species of activating our empathy and taking a fresh look at our relationships with other species?.

Join ARC and director Mark Devries as we co-host the Minnesota premiere of Speciesism: The Movie at 7:00 p.m. on March 13 at the Lagoon Cinema, 1329 Lagoon Ave. in Minneapolis, and ask Mark anything you’d like at the Q&A afterwards. You’ll never look at animals the same way again—especially humans. Tickets are going fast so get yours now and don’t miss out on seeing this historic documentary. You can watch the trailer here.