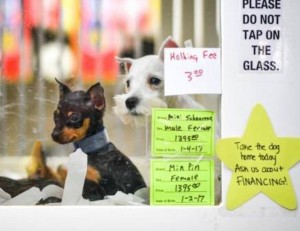 The Har Mar Pet Store in Roseville has finally closed after years of complaints about the conditions for animals in the store. Last spring, the Roseville city council banned the sale of dogs and cats in pet stores from large commercial breeders (puppy and kitten mills) from whom the store bought many of their animals.

Thanks to everyone who attended ARC protests at the Har Mar Mall, where the pet store was located, and contacted their council members about the proposed ban. You made a difference by helping to bring the issue of pet stores selling animals from puppy and kitten mills to the public’s attention.

See the Fox 9 news story about the Roseville ban, which showed footage from an ARC demonstration at Har Mar Mall. Kudos to HSUS and Animal Folks for their great work on the Roseville ban on the sale of dogs and cats in pet stores. Photo shows puppies that were for sale at the Har Mar store.