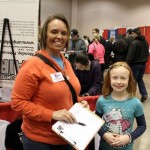 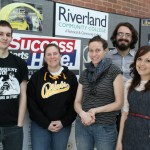 Our Pay Per View Outreach Team educated 88 Normandale College students in Bloomington on March 19 and 72 Riverland Community College students in Austin on April 1 about the suffering of animals used for food. We gave viewers an opportunity to share their thoughts about the movie, asked them to take a vegan pledge, and offered them an opportunity to receive one vegan recipe via email a week and to sign up for our monthly newsletter.
END_OF_DOCUMENT_TOKEN_TO_BE_REPLACED

Twenty-three years after Carol Adams published “The Sexual Politics of Meat,” a new collection of essays, “Defiant Daughters: 21 Women on Art, Activism, Animals, and the Sexual Politics of Meat” showcases the influence Adams’s book has had on subsequent generations of women. Come hear two of those women read selections from their essays on Monday, March 25 at 6:30 pm at Ethique Nouveau, 317 W 48th St. in south Minneapolis. ARC Program Director Dallas Rising and Kim Socha will lead an evening of powerful ideas, conversation, and a continued discussion of patriarchy and speciesism. Books will be available for signing and purchase. “Defiant Daughters” is also the selection for ARC’s April Book Club meeting on Sunday, April 28, 6:30pm at Common Roots, 2558 Lyndale Ave S in Minneapolis. 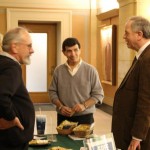 Thanks to everyone who helped with our Vegan Food Sampling event at the Minnesota State Capitol in St. Paul on March 5!

ARC volunteers Connie, Steve T., Garrett, and Steve S. did an excellent job giving out 181 food samples and 160 pieces of literature in a little over an hour. 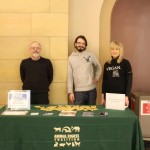 A legislator who had talked to us at another event stopped by and shared the changes he’d made since our last encounter. He said he hadn’t thought about the mass production of animals before and that he and his wife have been cutting down on animal products and including more whole fruits and veggies into their daily routine. It’s always so great to hear personal stories of how we’re making a difference for animals!

Pay Per View at Augsburg College 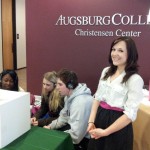 Our Pay Per View Outreach Team engaged and educated 84 Augsburg College students on February 18 about speciesism and the suffering of animals used for food. Volunteers Ben, Jenna, and Troy, and ARC Program Director Dallas Rising had many great follow-up conversations with students to get their reactions and hear their comments.

One student’s comment in particular said it all: “What made you decide to go vegan?” Troy asked a student during a debrief where the student chose ‘every meal’ as his vegan pledge. “This video.” replied the student. 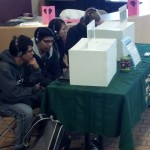 Our Pay Per View outreach program offers people one dollar to view a short video on practices in the animal agriculture industry, which includes footage taken in slaughterhouses and on farms. Then our trained volunteers have debrief conversations with viewers and provide them with take-home info about how changing their eating habits can make a huge difference for animals, the earth, and themselves. Viewers are asked to pledge to start eating plant-based meals for a specific number of days per week and are given information about ARC’s Vegan University program, which is designed to help people go – and stay – vegan in a way that works for them. 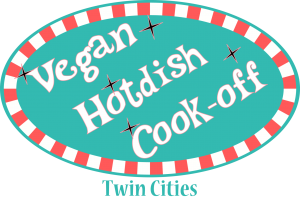 Thanks to everyone who came out to our Twin Cities’ Vegan Hotdish Cook-Off on February 9! We stopped counting after 110 people (too distracted by all the yummy food), and were thrilled to see all the new faces, many of whom remarked that they saw the story about the cook-off in the Star Tribune’s Taste section and came because they were curious to learn more about veganism. 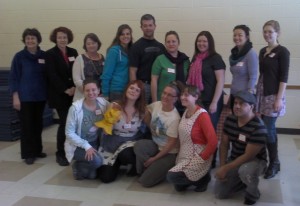 Thanks to our judges – Robin Asbell, author of Big Vegan and Sweet & Easy Vegan, and Florence Brammer, who helped introduce a vegan main dish category to the Minnesota State Fair cooking competition. And thanks to prize donors Adam Turman, Kitchen Window, Peace Coffee, Robin Asbell, and The Elixery.

Check out the winning recipe and some of the other recipes from the cook-off. More cook-off pictures can be found on the ARC Facebook page.

If you’d like to be notified when registration opens for next year’s cook-off, email Dallas at dallas@animalrightscoalition.com or call her at 612 822-616 with your contact info. 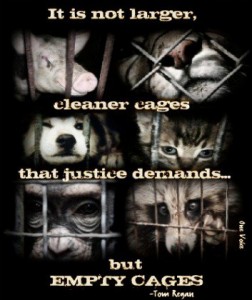 As one facet of the conversations we have with people, we encourage them to adopt a plant-based (vegan) diet. However, we believe that veganism is about more than what one does and doesn’t eat. Veganism rejects the commodity status of animals, and with animals as commodities in more than just the food production system, we have a moral imperative to protest the use of animals in labs, circuses, the clothing industry, etc.
END_OF_DOCUMENT_TOKEN_TO_BE_REPLACED

A Flurry of Activity With 100% Chance of Helping Animals 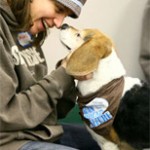 Thank you to all of you who made donations to ARC in 2012. If you meant to make a contribution before the end of the year, but time got away from you, no worries. Make your donation to ARC now and feel good about starting the New Year off right!

The start of a new year is often a time for reflection. I was thinking about what makes the Animal Rights Coalition so unique and why the work we do for animals continues to inspire me daily. Here are five things that make me proud to be part of an organization like ARC:

END_OF_DOCUMENT_TOKEN_TO_BE_REPLACED

It was great seeing so many members and friends at ARC’s annual Holiday Open House on Saturday, December 8 at Ethique Nouveau. We enjoyed chatting with all of you about everything ARC has accomplished this year and our plans for an even bigger and better 2013. Many thanks to Kaylyn Knopp for the scrumptious vegan appetizers.

We had lots of fun and cookies were flying at the annual vegan holiday cookie exchange on Saturday, December 15 at Ethique Nouveau.

Note that Ethique Nouveau will be open during the holidays on Sunday December 16 and December 23 from noon to 4:00pm in addition to the regular posted store hours.